How is Facebook going to monetize Messenger? Not by featuring games in the app like Korea’s KakaoTalk, at least for now. Instead, Facebook could concentrate on solving new problems with Messenger.

When I pressed Facebook’s EMEA Director of Platform Partnerships Julien Codorniou about whether Messenger would become a platform that hosts non-chat experiences but determined there were better ways to monetize the gaming ecosystem.

[Update: Facebook tells me now that Codorniou was wrong and misspoke. It says Facebook tested highlighting games with its main app, not Messenger. I fact checked quotes and conclusions from my talk with Codorniou multiple times with Facebook PR before publishing this story, and Facebook confirmed them at the time. It is definitely that odd such wrong information would pass Facebook’s fact check.]

Codorniou said that Facebook decided to focus on earning money from games by helping developers score users for their games through its app install ads. That strategy keeps Messenger lean rather than bloated with extra features.

Gaming within messaging apps works, even if Facebook has better options.

KakaoTalk used the 48 million people on its chat app to turn games and their in-app purchases into a massive business. Launched in July 2012, the platform sees developers release standalone games on iOS and Android that are branded with KakaoTalk and encourage the use of the chat app’s identity system for login. These include hits like “Dragon Flight For Kakao” and “Anipang For Kakao“.

Once downloaded, shortcuts for the games appear in the KakaoTalk navigation menu. Users can easily play with their KakaoTalk friends and share scores. Since launch, 593 games have joined the KakaoTalk platform. The Korean company earned $54 million off of games in Q3 2014, with much of that coming from its chat app-based mobile platform. 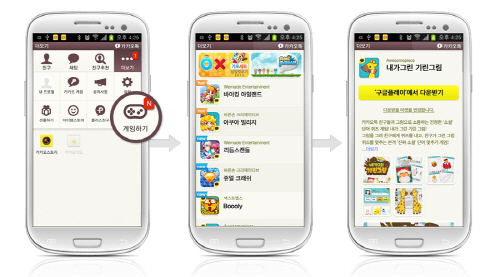 Facebook chose a different path for Messenger. As Mark Zuckerberg said recently in hispublic Q&A, “messaging is one of the few things that people actually do more than social networking.” It’s a highly competitive space, though, so Facebook keeping Messenger as quick and straightforward as possible in order to push growth and box out apps from WeChat to Viber to Snapchat.

Luckily, Facebook makes so much cash from its News Feed ads that it doesn’t need to rush to monetize Messenger. 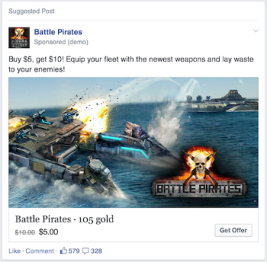 “We did some tests in the gaming space 18 months ago” Codorniou tells me. “Gave it a try. It was not a good option. We had better ways of monetizing the gaming ecosystems.”

[Update: Codorniou was wrong. He mixed up Messenger with Facebook’s main app.]

But developers don’t want to hinge the growth of their apps on haphazard editorial choices by platform owners. Codorniou explains, “[Typically developers] build a mobile app and then pray someone at Apple loves the game and promotes the game. That’s not something we want people to think about on the Facebook platform.”

Instead, developers want consistent ways to drive installs that are return on investment-positive. Codorniou says “Our mobile app ads just work. These ads on mobile are more reliable. We think you should be able to spend as much as you want for quality traffic.”

That’s good for developers, but it could also benefit Messenger users. Because international messaging services like KakaoTalk and Line tie their game platforms directly to their chat apps, a lot of game invite spam ends up flowing around. People try to find friends to play with or help them earn power-ups, but the messages end up being annoying.

If that sounds familiar, it’s because it’s exactly what happened to Facebook’s web games platform around 2010. Facebook let games from companies like Zynga easily spam the News Feed, and it got so bad that it threatened to drown out real content from friends and destroy the social network.

Facebook eventually had to severely limit who saw game spam to existing players, which saved News Feed for non-gamers, but also destroyed the virality of games companies that grew fat off the growth. This whiplash hurt Facebook’s relationship with developers for years to come, while also making people extremely weary of inviting all their Facebook friends to use apps or games.

By monetizing elsewhere and staying dedicated to messaging, Facebook Messenger has a shot at growing past its current 500 million user base and becoming the default chat app for much of the world. You can be sure that crown will come with plenty of ways to make money down the line.